…again with added music. (I suddenly noticed that it fitted another traditional tune perfectly!)

Down in the workhouse when I was a lad
No tongue can relate all the pleasures we had
Dry bread, and Bastille soup by the bowl
And a flogging or two for the good of our souls x2

A tale I recall of those happy times
And an orphan lad always to mischief inclined
He was ever in line for a kick, at the best
And the poor workhouse master could scarcely find rest

Till came the day one of the other lads died
“Aha!” says the master, “I’ll settle your pride!”
He shut up the lad in the dead-house to stay
Alone with the coffin until the next day

But what should Jack do but open the box
He takes out the corpse, and with it swaps clothes
Props it up on the rail at the top of the stairs
Then he hops in the box and the winding-sheet wears

And when it grew dark, the master came up
With a plate for Jack, some victuals to sup
Holds it out to the corpse on the rail
Who says not a word, but stands stiff, cold and pale

“Well, take it!” the master says in surprise
“I should think you’d be starving by now, damn your eyes!”
Then up leaps Jack, who was lying so still
And says “If he wunna eat it, I will!”

When the master heard this he got such a fright
He let go of the plate, and turned whiter than white
Gave a terrible shriek, such a fright did he get
Fell back down the stairs and near broke his neck

Wasn’t that a sad fall for a man such as he
So kind to his charges, with his boot so free?
So pity the poor who must live on the Roll
And think on the guardians and pray for their souls

A  song of mine based on a story of Knighton workhouse from ‘An idler on the Shropshire borders’, by Ida Gandy. Told to her by Ellen Hughes (nee Jordan) 1864-1940 also known as Granny Hughes. Many thanks to her great-granddaughter Denise Lewis of the Memories of Shropshire FB group for the information and photograph. Written in the 70s, but I figured it was about time I put a tune to it, since it features in a book I’m writing. 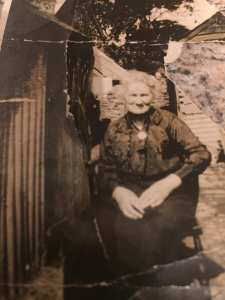 In the previous post, the tune used was one associated with many songs, often sea-songs, with a ‘down-derry-down’ chorus.

For this version, I’ve switched to the tune called The Limerick Rake, also used by Tom Paxton for The High Sheriff of Hazard and by Ewan MacColl for Champion at Keeping Them Rolling. I expect there are a good few others too: it’s an excellent tune.