Expansion of a blog article previously posted, with link to song but much more background information.

I’ve linked to this song before, but as I’ve added quite a lot of background info this time, I thought it was worth a post of its own.

The Abbey watches my train crawling Southwards
Thoughts of Cadfael kneeling in his cell
All along the Marches line, myth and history
Prose and rhyme
But these are tales I won’t be here to tell

Lawley and Caradoc fill my window
Facing down the Long Mynd, lost in rain
But I’m weighed down with the creaks and groans
Of all the years I’ve known
And I don’t think I’ll walk these hills again

‘The Abbey’ is actually Shrewsbury’s Abbey Church: not much else of the Abbey survived the Dissolution and Telford’s roadbuilding in 1836. Cadfael is the fictional monk/detective whose home was the Abbey around 1135-45, according to the novels by ‘Ellis Peters’ (Edith Pargeter).

The Welsh Marches Line runs from Newport (the one in Gwent) to Shrewsbury. Or, arguably, up as far as Crewe, since it follows the March of Wales from which it takes its name, the buffer zone between the Welsh principalities and the English monarchy which extended well into present-day Cheshire.

‘The hill’ is the Wrekin, which, though at a little over 400 metres high is smaller than many of the other Shropshire Hills, is isolated enough from the others to dominate the Shropshire Plain. The beacon is at the top of the Wrekin Transmitting Station mast, though a beacon was first erected there during WWII. The Shropshire toast ‘All friends around the Wrekin’ seems to have been recorded first in the dedication of George Farquar’s 1706 play ‘The Recruiting Officer’, set in Shrewsbury. 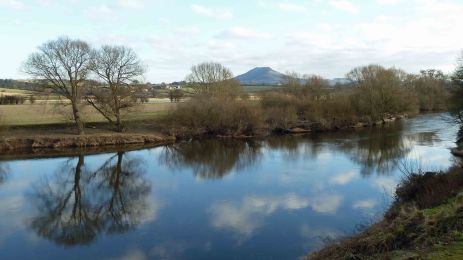 ‘Lawley’ refers to the hill rather than the township in Telford. The Lawley and Caer Caradoc do indeed dominate the landscape on the East side of the Stretton Gap coming towards Church Stretton from the North via the Marches Line or the A49, while the Long Mynd (‘Long Mountain’) pretty much owns the Western side of the Gap.

Stokesay Castle, near Craven Arms, is technically a fortified manor house rather than a true castle. It was built in the late 13th century by the wool merchant Laurence of Ludlow, and has been extensively restored in recent years by English Heritage, who suggest that the lightness of its fortification might actually have been intentional, to avoid presenting any threat to the established Marcher Lords.

Prince Arthur, elder brother of Henry VIII, was sent with his bride Catherine of Aragon to Ludlow administer the Council of Wales and the Marches, and died there after only a few months. Catherine went on to marry and be divorced by Henry VIII, and died about 30 years later at Kimbolton Castle. Catherine is reputed to haunt Kimbolton, so it’s unlikely that she also haunts Whitcliffe, the other side of the Teme from Ludlow Castle. (As far as I know, no-one is claimed to haunt Whitcliffe. Poetic licence…)

For some time it has puzzled me that in ‘A Ballad for Catherine of Aragon’, Charles Causley refers to her as “…a Queen of 24…” until I realized he was probably referring not to her age, but to the length of time that she was acknowledged to be Queen of England. 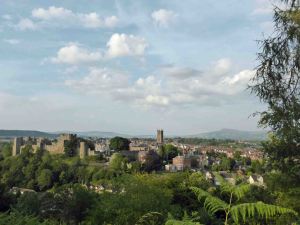 The ashes of A.E. Housman are indeed buried in the grounds of St. Laurence’s church, Ludlow, which is not in fact a cathedral, but is often referred to as ‘the Cathedral of the Marches’. It is indeed a church with many fine features (I have about a zillion photographs of its misericords) and its tower is visible from a considerable distance (and plays a major part in Housman’s poem ‘The Recruit’).

The song was actually mostly written on a train between Shrewsbury and Newport at a time when I was frequently commuting between Shropshire and Cornwall to visit my frail 94-year-old mother, who died a few months after, so it has particular resonance for me. It originally included a couple of extra verses about Hereford and the Vale of Usk, but after the ‘Wrekin’ chorus forced its way into the song, I decided to restrict it to the Shropshire-related verses. Maybe they’ll turn up sometime as another song.

Another review for folking.com: JOHN MAYALL– Nobody Told Me (Forty Below Records FBR 022)