Under the wide and starry sky,
Dig the grave and let me lie.
Glad did I live and gladly die,
And I laid me down with a will

This be the verse you grave for me:
Here he lies where he longed to be;
Home is the sailor, home from sea,
And the hunter home from the hill.

Home is the sailor, home from sea:
Her far-borne canvas furled
The ship pours shining on the quay
The plunder of the world.

Home is the hunter from the hill:
Fast in the boundless snare
All flesh lies taken at his will
And every fowl of air.

‘Tis evening on the moorland free,
The starlit wave is still:
Home is the sailor from the sea,
The hunter from the hill.

One of my occasional reviews for folking.com:

I’m not expecting this post to make any difference, but here it is anyway.

I’m not looking for external articles for this blog, though I can’t say for sure that there’s no way I’d ever consider one.

However, it’s very unlikely indeed that I’ll ever consider an external article that has no relevance to this blog. And certainly not if it’s blatant spam.

We now return you to your normal programming.

Words & Music by David A. Harley (all rights reserved)

This will hopefully evolve into something a little more polished, but I think the words are about where they should be. Unlike the politicians who ‘inspired’ them.

The clown wants some words to divert you
And asks me to build him some jests
A wink and a nudge, to distract some harsh judge
But that’s not the job I do best

The emperor assumes that I love him
This bully, this man without shame
He believes that I’ll praise all the lies he portrays
From his seat on the gravy train

A friend of the Fancy, his nose to the trough
Makes his profits from public pain
I can buy with sweet notes my way onto the lifeboat
If I honour this grandson of Cain

Immoralized in virtual print once more by the amazing Michael Hocking, during a live video set with the Kettle and Wink folks. I’d barely discovered the Friday night songwriters’ session when the world went crazy and I had to self-isolate. Ah, well… Evidently I was singing this at the time. 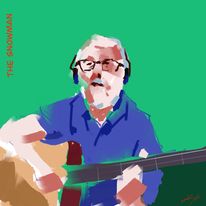 Last in a series of reviews for Folking.com of a series of CDs on a seasonal theme. While this one is loosely linked to summer, it’s largely focused on work and emigration issues.

Recommended to me by my friend Andi Lee (The Ashen): a Mixcloud podcast series by Jon Wilks at The Old Songs Podcast. Here’s the current listing:

I’ve been dipping in and out of UK and Irish folk music for many decades now, and am well-acquainted with most of these songs, but still found much to enjoy here.

At the time I wrote this, even being forty didn’t seem something I needed to identify with: all the other stuff seemed far, far away. So not too many biographical clues here. 🙂 In fact, I used to precede it with ‘Love Hurts’ so that you had two diversely miserable love stories together: however, I don’t think I could get away with singing ‘I’m young, I know…’ these days.

Gas bill trouble
Rent is doubled
You say
“NOW what’s wrong with you?”

I’m underpaid and overweight
So let’s go and celebrate

Who said life begins at 40?

Sorry
Sorry
Always saying sorry
Always praying
There might be some peace sometime
The other side of 65
But would it be so hard to be
Another aging divorcee?

Last time I saw Jeannine, we lost most of our time
In the company of friends who were neither hers nor mine

Castaways in different cities, working through some breaks
Regretting our vocations, scared of making more mistakes

And we talked of where we’d been
How we’d passed the interim
Since the last time together, building up
A wall of coffee cups and cigarette ends
Keeping our last rendezvous
At least, it looks to be the last we’ll keep

The last time I saw Jeannine, we lost most of our time
Talking of ourselves in terms of once upon a time

And shied away from conversation
Of ourselves but in relation
To each other, but together, building up
A wall of alibis half-spoken
And chances we were missing
At least, from here it seems we’ve missed them all

The first line does, I suppose, invite comparison with Joni Mitchell’s ‘The Last Time I Saw Richard’, though I didn’t hear that until several years later. But I suppose you could also compare it to ‘The Last Time I Saw Paris’ or ‘Last Time He Saw Marie‘ if you really wanted, and you’d still be wrong. Personally I prefer the Mitchell song, but this has a certain nostalgic je ne sais quoi. See what I did there?

And for anyone whose interested in any biographical elements, the lady’s name wasn’t Jeannine or Richard, and it was Bangor (North Wales), not Paris.

I just realized that I also used the line ‘Last time I saw…’ in Diane. Probably Diane is the better song, and written about someone completely different. Whose name was not Diane, Richard or Jeannine.

Anyway, I promise not to use the line again. Probably.