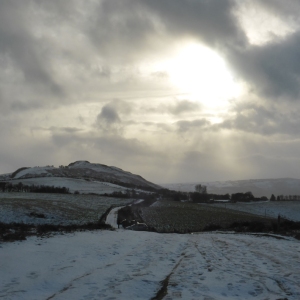 The album is available digitally from Bandcamp. If you’d also like a physical CD, contact me via the Wheal Alice contact form and I’ll see what I can do.

Most of the songs here have a Shropshire connection and a somewhat ‘folky’ feel, but I haven’t kept strictly to either criterion for inclusion. Most of these songs previously appeared on CDs no longer available, but the versions on the CD are re-recorded and/or remixed and/or remastered.

Song of Chivalry has been published several times as a poem, but I finally got around to writing the tune quite recently. The instrumental that I used as an introduction is usually associated with the ballad The Holy Well (Roud 1697).

Castles and Kings draws on my trainspotting childhood in Shrewsbury. I like to think of it as a sort of West Midlands train blues.

The words to Breathe My Lute were written by a teenage Housman for an entertainment of some sort, as sung by Lady Jane Grey the night before her execution. I don’t know of a tune so I wrote one.

When I was combines ‘A Shropshire Lad’ XVIII and XIII, separated by a quasi-orchestral interlude, reflecting contrasting experiences of youthful love.

On Bredon Hill is a setting of ‘A Shropshire Lad’ XXI. I know Bredon is not in Shropshire, and so, no doubt, did Housman, who was actually from Worcestershire.

There is an extended recorded version of the instrumental Moonflow III, but it seemed odd to introduce electric guitars into an essentially acoustic album.

Thomas Anderson was executed in Shrewsbury in 1752 by way of discouraging Jacobite unrest. The lyric is based on an article by the late Ron Nurse.

Tears of Morning and Sea Fret seem to belong together as they are both about the faraway death of a lost love. The first song sets Housman’s words from ‘Last Poems’ (XXVI, XXVII).

The words to Ballad of the Arbor Tree were written by ‘W.H.B.’, probably in the late 18th or early 19th century. The black poplar at Aston Clun is still ‘dressed’ with flags on or near Arbor Day, in celebration of an 18th century wedding as well as Oak Apple Day.

Severn Shore is my setting of ‘A Shropshire Lad’ VIII.

Carpentry is an extended instrumental version of the tune used for my setting to The Carpenter’s Son.

For some years after moving to Cornwall, I spent a lot of time commuting between Penzance and Shropshire, in order to keep an eye on my elderly mother. Wrekin (The Marches Line) is about the ‘myth and history’ of the section of the Marches Line between Ludlow and Shrewsbury. Someday I may give some attention to the section between Leominster and Newport – there are a couple of possible verses in draft…