Roger Waters’ song for Pink Floyd probably isn’t the most obvious candidate for an old-timey treatment (and frankly, this isn’t very old-timey at all), but I thought it would be interesting to do it with some mandolin and banjo behind the acoustic guitar, and just a little electric guitar. Unusually for me, that really is a banjo, not a guitar pretending to be a banjo. I do intend to come back to it, and the instrumentation might well be different.

Alternate take (but still very much a demo): without the mandolin, banjo and electric guitar, but added some slide (resonator, not electric). Definitely not old-timey. Oh well.

I’m actually reasonably happy with this version, but as it was recorded to try out a different recording/mixing configuration, it’s tagged as a demo for now.

One of my earliest songs, written in the late 60s (though it’s been through a few changes since then: haven’t we all?)

[CD review by Keith Whiddon (of The Flying Toads and Bouzatina): thanks, Keith! A Shropshire connection rather than a Cornwall connection,  so also posted at Sabrinaflu, but it sounds like an interesting album (which I hope to be able to review myself in the near future).] 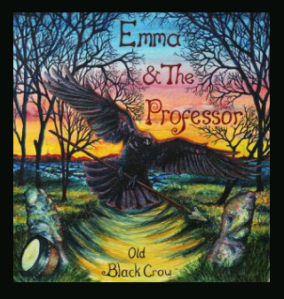 Many of the songs are self-penned and inspired by the ancient history and beauty of the couple’s native Shropshire. Emma has a rich and powerful voice and driving guitar style while Mark’s no-nonsense bodhrán playing roots the music and sets its direction. The end result is an uplifting and exciting listening experience.

Right from the opening title track it is clear that this is an album of full-throttle songs! ‘Old Black Crow’ is a rockin’ bluesy romp, driven along nicely by Benji Kirkpatrick guesting on banjo.

Mark’s ‘Battle Of The Marches’ features Kirkpatrick on bouzouki and tells tales of the mysticism that lies in the hills of the duo’s native Shropshire. This is no wimpy fairy story, more a full-on battle of Middle-earth epic proportions!

The beautifully sensitive ‘Servant Slave’ is of marked contrast. With its Middle-Eastern overtones reinforced by Kirkpatrick’s bouzouki, here Emma’s voice is showcased to good effect.

The traditional American murder ballad ‘Rain And Snow’ is given a makeover, with impressive fiddle provided by Jack Rowe. The concluding ‘Rivers’ is like an Indian Raga, Emma harmonising with herself across Mark’s driving rhythm section.

Old Black Crow radiates with the energy that lies within the ancient lands of the Welsh Marches. Here are tales of sorrow, loss, hope and love all delivered with deep passion and soul.

…one of the band’s members, Dan Rubin, contacted me in search of some information. It’s a bit outside my sphere of knowledge (and a bit too far East for me geographically), but perhaps someone who reads this blog – there must be someone! – will have some ideas.

… I live in Pouch Cove now,  a small community north of St. John’s, which is the closest town in continental North America to Europe.

The influence of Devon is strong here. I bought and now live in a house built by Henry Langmead, whose family arrived from the West Country in the late 1800s, or perhaps earlier. Henry (known locally as Harry) was our last traditional mummer who practiced a tradition known as the Ribbon Fools. These people dressed up in white clothes adorned with multi-coloured ribbons, and created ornate and very scary masks to hide their faces. Unlike the Irish Jannies who went from house to house during Christmas, often cross-dressed, disguised and playing instruments, the Ribbon Fools would appear between Christmas and Old Christmas Day (the eighth of January) and would chase anyone they caught down the road, trying to whip them with the end of a rope.

I helped start our town’s Heritage Society, and have been trying to research this tradition for some years. But the leads are few. I have seen pictures of Morris Dancers with similar costumes, including some in a book that Sally lent me. But I would like to know more specifically where this tradition originated, and whether it has roots in Devon and the surrounding area.

If you can assist me in finding out more, that would be wonderful. It would be another strong link between Devon and Newfoundland.

This song was originally part of a set of songs I started in the 1970s but never actually finished. In those days my generation was very much preoccupied with Vietnam and its neighbours, though the story wasn’t meant to be geographically or politically specific. More about the psychology of occupation and the winning (and losing) of hearts and minds… I was very much of a generation of songwriter that was very focused on issues, he said pretentiously.

cropped hair
and death-in-life hero eyes
how long
before you spread your epaulettes
and fly?

soldier
you come
you go

The lyric was published in Chaff 2, 1985. A version of this was recorded for the Scriptwrecked tape, but I’ve just re-recorded it for this site.

I wrote the words (more or less) in the late 60s. The original tune was later used for something else, so I was kind of making a variation up as I went along on this demo. Of its time, but I like it. Sketch for a better version later, when I finally learn it.

In the intimate oblivion of collusion
I see you dancing with another man
And I know that you’ll tell me it’s a really groovy scene
But I never much liked dancing, Marianne

So go take your problems to a new confessor
Perhaps he’ll listen while he holds your hand
But don’t expect him to provide you with the answers
It’s not a caseload that he’s after, Marianne

I’ve tried to talk it over as a lover
But I can’t seem to make you understand
You’re not the kind to be content with me the way I am
And I like to make my own scene, Marianne

And you tell me that I’m fettered by illusions
And you’ve had all the chaining you can stand
I’d hate to be the one to block your freedom
But I’m not into two-timing, Marianne

And you’ll tell every word I say is empty
And I know that you don’t need my helping hand
I’m not the one to say I didn’t love you
But I never really liked you, Marianne

This Song’s Not Over (Words and Music by David Harley, copyright 1974)

I guess we broke too easy
I know I dragged my feet
But hold on, and we’ll make it
Right back to Easy Street