A forthcoming album by Sarah McQuaid that I’m looking forward to reviewing. 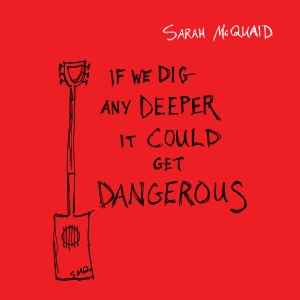 This article isn’t about Michael Chapman, but bear with me… Towards the end of the 1960s I acquired his album Rainmaker, and found him to be an innovative guitarist and very distinctive singer/songwriter/. (I remember confusing one of my friends by saying that a song of his reminded me pleasantly of Michael Chapman, until I realized that he thought I meant that Chinnichap chap! ) I played Rainmaker a lot in my teens, and it certainly influenced my early guitar playing. Ironically, I finally parted with the album, along with nearly all my other vinyl, when moving to Cornwall.

Ironically? Well, mildly, in that it’s since that move to Cornwall that his name has recently crossed my radar again. Specifically, as producer of the forthcoming 5th album by the very talented Sarah McQuaid, a well-known name not only here in Cornwall, but far beyond.

Interestingly, Sarah not only shares but exceeds my own passion for the DAGDAD guitar tuning, having written a book and developed two workshops on using it. But her singing and songwriting has earned her many fans who may not know much about modal tunings, but appreciate a fine performance.

I’m looking forward to reviewing her new album If We Dig Any Deeper It Could Get Dangerous nearer to the release date (due out 2nd February 2018). In the meantime, you might like to check out the track The Tug Of The Moon, which is on the album but was released as a single in November 2017: see Mawgan Lewis’s intriguing video here.